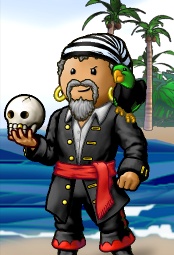 Depix started playing during March/April 2005. He joined a small crew at first, learning the basics, while saving for his first sloop. After buying a sloop, he joined Brotherhood of Steel, where he learnt more about the game, becoming more 'elite', running KB pillages, and slowly saving more PoE.

He then made his own crew, The Insane Clowns, he renamed his sloop to Insane Clownfish during his time with the crew. He was then offered a fleet officer position with the crew Infestus, which he accepted after leaving another crew member in charge, he then worked his way up to senior officer in the crew, he pillaged alot with the captain, Goodluck, where he refined his Battle Navigation skills.

Himself, Goodluck, and Treepirate decided to make their own crew, naming it Mercenaries of War, however, it didn't quite get off the ground, so he joined Rated Arr, where he met Antix and Bulletproof.

After some flag movement and war, Rated Arr ended up in Vanguard. Then, when Antix quit the game (twice), he decided to make his own - one-man - crew, Mercenaries of War.

He was happy to accept new members, however, no one managed to follow all of the crew rules.

Depix then moved back to Infestus where he helped take over 3 islands. After the flag royalty getting banned, Depix took over to put Subtle Tease to rest.

Depix was out of play for a while until Antix' ban was lifted and is now a Senior Officer in the crew Rockstars with Antix and co; spending his time PvPing and b-navving in blockades.