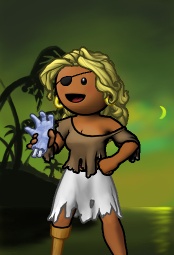 Decemberain a.k.a. Rainy or Rain started out late in 2004. Joining her husband Laotzu (who is now Laotze) in Eastern Winds-Yakuza of the flag Don't Panic. Following her husband they left E.W.Y. and formed their own crew called the Enlightened Pillagers. Rainy has always been a free spirit having floated around the Midnight Ocean with quite a few different crews. From a short stay in Raptus Regaliter, to Lilly's Wolfpack, to Corsairs, she found a resting place with the Misfit Marauders; under the direction of Rummykins.

Shortly after her first birthday on the Midnight Ocean she took a vacation. After several months of off time she missed her mates, and returned. Joining back with the Misfit Mauraders only to find most of her mates along with her captain, Rummykins, were gone. Following the lead of her mates she joined The Phoenicians, who were still under the flag of Black Sheep Brigade. After a nuclear explosion of the Black Sheep Brigade, Decemberain started Anne Bonny's on the 15th of November 2006.

With the July 1, 2007 blockade of Orca Rain joined Avast Party People to help out, and has stayed until August 19, 2007 when she joined the crew Completly Offensive in the flag of Blighted as a Senior Officer. As the months passed she was handed the captain's hat, and moved her crew over to the flag of Rackham's Revenge.

Rainy enjoys helping new pirates to learn the mechanics of the game, PvPing, pillaging, and going to war with other flags.

Rainy can also be found on Viridian Ocean with her crew Meridian Cougars.

"Came here to start for blockade purposes but decided it was too cozy to leave! She has also been a super great help with multiple aspects of blockade preperation. She's always fun to be around and will definitely get you to pml!"