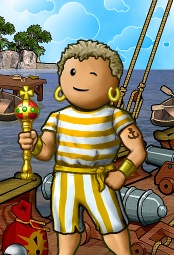 Deathsenemy was a senior officer on the Hunter Ocean. On September 23, 2006, he had an in-game marriage to Faeviolet. His ambition was to lead a flag toward conquering Toba Island. However he never achieved that goal. He retired on December 3, 2006 after forming the crew Phoenix Rising. It is rumored among experienced players he only had two crews; Epic of the flag Varsity and Phoenix Rising under The Trinity. Now he's back out of retirement eternally searching for his revenge... Deathsenemy may or may not be an independent pirate now.