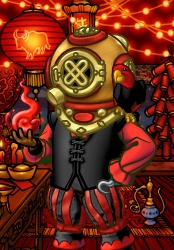 Darlie is captain of Valentine Dragon on the Cobalt Ocean.

Darlie started on the Cobalt ocean in 2006, and has been playing on that ocean for the past 2 years. He is the proud captain of the crew Valentine Dragon. The name of the crew originated from an anagram of his girlfriend's name and his own put together.

Darlie can regularly be found pillaging, running flotillas, taking Atlantis runs, and going to the Cursed Isles on Cobalt, basically anything that allows him to battle navigate. Nonetheless, he spends small amounts of time on the Midnight and Hunter Oceans. He enjoys meeting new people and making friends.

He's known for his sloop and baghlah pillages and remarkable battle navigation skills in general.