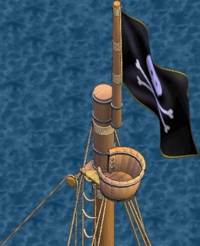 The crow's nest of a sloop

The crow's nest is located above the main deck of a ship and is accessible by clicking on an arrow on the deck near the base of the mast. In the crow's nest, a pirate can view a much larger area of the surrounding waters than from a puzzle, and the might rings of the ships nearby. All ships have at least one crow's nest; larger ships have as many as three.

The crow's nest scene is rarely shown in the main window (only when placing furniture). By climbing to the crow's nest, pirates gain a bird's-eye view of the surrounding environment. While sailing or deported, the view shows nearby vessels in the main window. In battle, it shows an enlarged battle board. In both cases, the main window displays what other pirates aboard the ship elsewhere will see in their minimap.

The size of the area that may be seen depends on whether a player has the game window maximised and on their screen resolution. To leave the crow's nest, click the X at the top right corner of the View from the Crow's Nest pane or click the arrow in the crow's nest.

From the crow's nest, the commanding officer or other pirate of rank officer or higher can initiate pursuit on other ships, and the expanded visibility that the crow's nest permits allows engagements to be made sooner and thus often more successfully. The crow's nest is not considered a duty station and, as such, a ship's commander will often take a dim view of a crew member, especially one beneath the rank of officer, assuming the position without being asked to do so. An officer assigned to man the crow's nest may often use the radar as well. 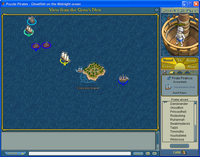 View from the Crow's Nest
Retrieved from "https://yppedia.puzzlepirates.com/index.php?title=Crow%27s_nest&oldid=715535"
Categories: