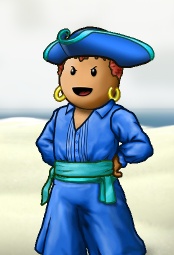 Crashdoom is the Captain of the crew The Deadlights on Midnight and Hunter. He currently sails the Hunter Ocean.