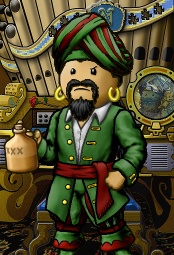 Corteez is a pirate on the Meridian Ocean.

Corteez began on the Viridian Ocean, and now sails on Meridian. Apart from being an amazing swordfighter who ends up taking PoE from all the so-called "greats" on a daily basis, Corteez is a kind-hearted person who gives selflessly to his crew and hearties. He has given a lot to the Puzzle Pirates community. Don't ever bring any of this up when talking to him, though, because he is far too modest to admit any of his good traits and insists he needs improvement.

Corteez is ranked as a Fleet Officer, and titled Cook of the crew Regent. He is a member of the flag Tainted Purity, and an Admiral in the Olive Island Navy in the Jade Archipelago.