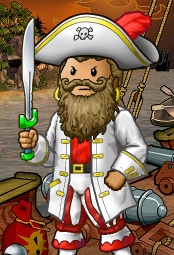 Coleanton is an independent pirate on the Emerald Ocean (originally from Sage) as well as the Opal Ocean.

He started playing the game in late 2004. At first he started out as a cabin person for Red Tide and later became pirate for that crew, then he was asked by Mickythecpat to join The Sage raiders as officer and later became a senior officer. After a bit of thought he decided to leave that crew and make his own, the Shadows of the Abyss. He enjoyed being captain and king and their privileges/responsibilities, but soon found that it was too expensive and too much work for him. He was then pillaging and puzzling in the crew Xensity as a senior officer.

He started playing on Opal on March 4th 2007 when he needed a little break from Sage and then he got interested in the partly abandoned ocean.