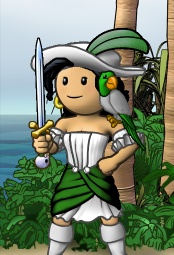 Clover is currently captain and muse of the crew Radical Dreamers and a member of the flag Dream Reapers.

Clover, one of the original members of Radical Dreamers, and a one time captain of said crew, remains an ever loyal senior officer to the name unless of course she is captain again, which she is. To the crew she brings with her her parrot, Fortune (who contrary to popular belief is not stapled to her shoulder and would not make a tasty meal), and an abundance of the colors green and white.

In her prime some credited her as one of the best swordfighters in the ocean; she obtained a majority of her wealth tournament hopping.

Clover can't drink to save her life.