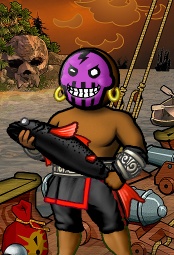 Cheifthunder is the captain of the crew The Instinct, king of the flag Killer Instinct, and former governor of Cringe Island on the Ice Ocean. Formerly a gunner on Hunter, he now is usually not allowed to gun due to his low rank. His name comes from a character from Rare's game Killer Instinct.

First of all, Cheifthunder used to be called 'Cheif' but now prefers to be called 'Thunder'. Thunder went on Ice and saw a pillage and joined the crew fully. He later created his own crew which has grown and been successful. He also has 5 pets so far, Tomahawk (rat), Lightning (cat), Thunder Storm (sheep), Pheonix (dog), Peter Porker (pig), and his most recent pet, Green Claws (Mala-Cat).

Cheifthunder was a normal person but never knew of his past. He joined crews and became a pirate captain. Though not until recently has he discovered he has a past from the Cursed Isles. Now he must be a pirate in hope of ever being able to see his people again!