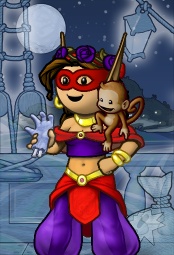 Chaboogie is captain and muse of the crew Cha-Boogie All Day and the queen of the flag Family Ties on the Midnight Ocean. Family Ties celebrated four years as a flag on the Midnight Ocean on October 3rd, 2010. The crew and flag began back in 2006 with four families from different parts of the world. It was started with a family from the US (Chaboogie family), a family from Canada (Allday family), a family from Australia (Monandoeg family), and a family from England (Saltychoc family). The crew grew, and was even ranked #1 in fame in its earlier days. Many pirates have passed through the crew, some came to stay for a long time, others moved on their own crews and flags, and some have come back after a long time away from the game. All are welcome at anytime.

Chaboogie started playing PP under a different pirate name in the fall of 2005. Her daughter Corneilia, needed poe, and Chaboogie was good at making it playing hearts. Soon Chaboogie was hooked on the game. Corneilia had to have a subbed account because "she wanted her pirate to wear boots", and also because Chaboogie could only play hearts on Tuesdays and Saturdays. Soon after Chaboogie got her own subbed account and her two boys Randumb and Flyinhawaiin joined as well.

Chaboogie's name comes from a song that Corneilia tap danced to back in the Spring of 2006. The title of the song was ChooChoo-Chaboogie. Chaboogie had been singing it all week during rehearsals and performances and when she created her own pirate the night of the last dance recital, that song was still on her mind.

Chaboogie's favorite puzzles are Shipwright and Bilge. The shipyard workroom or a ship with full bilge are a couple of her favorite places to be found puzzling. Chaboogie is also an avid Skellie and Zombie fighter and can be found swordfighting or rumbling at frays all over the Midnight Ocean. In 2007 Chaboogie memmed the entire Midnight Ocean in less than a month.

To relax Chaboogie goes to one of her decorated homes on the midnight ocean. Chaboogie loves to decorate, especially gardens. She has a couple of beautiful gardens, one at her Manor on Lagniappe, and another at her Estate on Jorvik. She and her daughter Corneilia also designed a garden in tribute to Puzzle Pirates at their Villa on Zeta. Next up, the gardens at the Flag hall.

Chaboogie has also been a merchant for most of her years playing the game. At one time she had 10 stalls, most of them in the Jet Arch. A couple years ago, she bought a shipyard shop on Zeta. These days you can find Chaboogie running many shoppes and stalls, mostly on Zeta, Oestrum and Cleo. Chaboogie became Governor of Cleopatra's Pearls on January 15th, 2011.