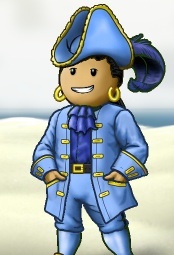 Captainkam is a Fleet Officer and Navigator of Truth be Told. After a period of retirement from Puzzle Pirates, he returned in March 2013, joining his current crew and flag. In keen remembrance of the Sea Monster Hunts he used to have on his previous life, he was recruited into Truth Be Told by Jeannemarie.

Captainkam was a very active member of the crew Obscure Spirits. His character was created on July 11th, 2009. He was a senior officer, and had supported the crew for 3 years. When he has spare time, he enjoyed making the crew laugh. His jokes and playfulness are one of his unique qualities. He often has obcessions with Cursed Isle trips and his favorite: Imperial Outposts. He was rewarded a peerage by the queen: Prettyhr, as Lord of the flag, Shadow Company, and now promoted to the rank of Prince (Royal) of the Flag on October the 5th, 2010.