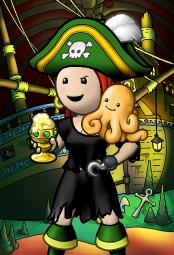 Bluddybeth, also known as Beth, is the captain and cartographer of the crew Crossbones and a lady of the flag Elements of Fear. Furthermore, Bluddybeth has admiral rank in the Tigerleaf Mountain Navy.

Bluddybeth started out as an ancient but innocent pirate by default..too many missed dinners due to housemate's fascination with all things sailing and carping..more a case of if you cant beat them..ye just gotta join them!!

Floundering about in the seas of Cobalt she met an interesting character by the name of Snort, he was a seasoned salt, a pom, drank a lot, but ate and slept even more. He took her onboard as a greenie and she liked the cut of his gib and signed on as crew. Snort introduced her to many, made her work extremely hard, pushed her to reach goals she didnt even know she had. He was and is the force behind Beth as ye know her.

Sometime later Snort was forced to take a back seat in all things pirate and nominated Beth as the Captain of Crossbones. She continues to this day with the help of some wonderful mates,understanding of the crew and support from the Flag royalty.

Beth would like to thank the youngest Crossbones Blakeshaft for making this page possible!!