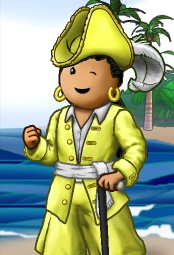 Bloodydeath is a pirate on the Midnight Ocean.He lives happily on Guava Island. He is the captain and Co-Founder of the crew Death Hunters and Lord of the flag Booching Blaggards.

Bloodydeath washed up on the shores of Nammath island sometime in early 2006. After roaming around, he finally settled in the crew Loyalty Haven, under Captain Stormmutant. He worked his way up to Senior Officer. He then left, and created his own crew, Death's Hunters. where he then re-joined Stormmutant in the flag Sword of Honor. He soon hired a new pirate named Cookycookie, who would eventually become his first mate, and in-game wife. Bloodydeath was prince of Sword of Honor for some time, till he and his crew left. After testing some other flags, Bloodydeath and Cookycookie soon joined Stormmutant's crew again, but eventually left, and join the flag The Pack, where they are today.