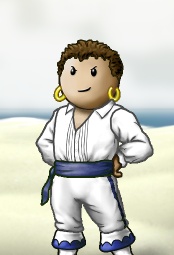 Bladerr is fleet officer of the crew Metropolis and a member of the flag Rest In Pieces on the Hunter Ocean.

Also known as Blade to friends and crewmates, he moved from crew to crew searching for his right home until he joined the X-ecutioners, led by Jessicalaura. There, he met Schwa who later formed the 'Schwa'-Faction, in which Blade became a loyal and valued member.

Joining as a fleet officer, he met some of his best friends in that crew. He gained the rank senior officer after approximately two months. Then on May 26 2007, Schwa passed on his captaincy to Bladerr, at the same time leaving the game. He was eventually made a prince of the flag Light Future.

Following the disbandment of 'Schwa'-Faction, he joined Bobalob's Lost City Empire, where he gained much trust and respect from his fellow crewmates, eventually rising to the rank of captain. Previously forged loyalties called back however, and he departed to rejoin his previous captain, Schwa, in Schwa's new crew - Metropolis.