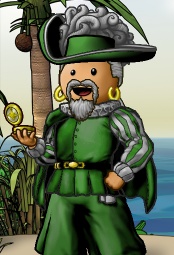 His charm is so contagious, wars have been fought for it. Every time he goes for a swim, Brigand Kings appear. Antillian abductors have asked him to probe them. If he were to chart you, you wouldn't get lost, and arrive right on time. His legend precedes him, like cannon shots before a sinking. The Ocean Masters often question him cause they find him intresting. Even his enemies list him as their emergency flag contact. He's been known to cause narcolepsy in a chat room. He's a pacifist not a pirate, but he's also a pirate so don't get any ideas. He can declare war on ye with his looks or his hands, either way. His reputation is expanding faster than the oceans.

He is The Most Intresting Pirate of Midnight.

"I don't always drink swill, but when I do, I drink Midnight's finest!"