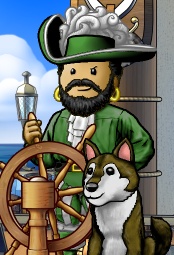 Bennykelly is a Fleet officer in the crew Pouncing Piranhas and a member of the flag United We Stand on the Meridian Ocean.

Bennykelly started his piracy in early 2005. He only played for a few months before leaving the game. He later decided to return to Puzzle Pirates upon the opening of Malachite. He then left the game after another few months playing. Bennykelly retired from playing yet again in 2011 on the Viridian Ocean.