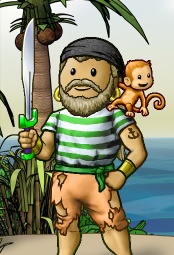 Bearclaw sails the Midnight Ocean with his mates from Black Death. His most prized accomplishment is winning Clawdius, an orange-furred monkey, in the 9th Black Death Swords Tournament of 2005 on Midnight. It was an arduous adventure for him, as he struggled through every minute of the tournament. He barely made the qualifying round in the preliminary round (prelims) only to be thrown on a small Midnight island, Midsummer to be exact, surrounded by the best fighters from all the oceans. There was no escape; he had to fight.

Shedding lots of blood (and fur) in the Swiss round, Bearclaw ended up in a three way tie for the familiar round. In the tie breaker matches, he fought his way to the 7th seed in this eight pirate top bracket. There he faced Eyes, Demonyaj, and Punishment: his fearless captain, his powerful mentor, and a mysterious character to him, respectively. The fighting was vicious, the attacks were deadly, and the breakers were scarce. When the dust settled, and the tide rolled in, Bearclaw was the pirate who survived - barely - and he hobbled away with Clawdius at his side, after soundly defeating Punishment, who in fact went on to win the second monkey.