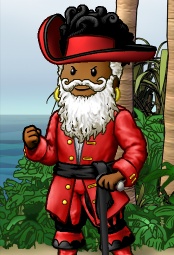 Barbarosaa is currently captain of the crew Jannissaries on the Emerald Ocean. He previously commanded Barbary Corsairs and ruled over the Sage Ocean flag Black Coast as king.

While he is also known as 'Barbarosaa the Great', his friends affectionately call him Barb. He started playing Puzzle Pirates in the summer of 2005. He joined a greenie crew and worked hard to become fleet officer; his captain then took a short leave of absence (a week), promising to promote Barb to Senior Officer for his loyalty. Barbarosaa stayed with the crew and earned his post, but soon after, he disappeared.

Two months later, he logged back on to find that he was the only member left in his crew. His captain had gone into exile (received a ban) while Barb was gone, leaving the crew to fall apart. Despondent, he began to work on his stats, playing more and more. Finally, while messing around with the promotion system one day, he found he could make himself captain of his old crew. But with the little knowledge he had of the game, he realized that he would need assistance, and began to research everything about crews on YPPedia. Using the only two Shanghais the crew had, he renamed them and thus, the "Barbary Corsairs" were born, soon becoming one of the greatest crew's to sail the seas.

Barb returned to to Y!PP after an indeterminate absence, and established the crew Jannisarries in September 2015- 10 years after he began his pirating career. The crew is formed mostly of players "from the old orders of the Jolly Roger" intent to reclaim their fame.