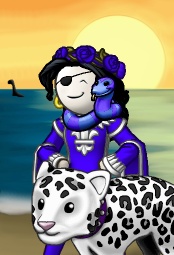 Aurorafaith, or Rora the FrOOtz (as her friends call her), who according to Y!PP records began playing YPP in June of 2004. In 2004, she joined the crew White Rose of the flag The Jolly Company. A year later, she created her own crew Irenic Halcyons in her own flag, Alcyone's Serenity. Upon taking a three-month leave of absence, she returned to a flag that had fallen apart.

Disbanding the flag and joining the Sexi Star Flag, Aurorafaith soon after became princess. Leaving the flag a few months later, for personal reasons, she then became a part of the flag Elysian Fields. After three months of being with the flag, she merged crews with Dark Water.

Leaving Elysian Fields to go her separate way, she was then picked up by a hearty from The Phoenix Warriors. Aurorafaith's term as Royal of Elysian Fields was about a year.

She is currently a Senior Officer of The Phoenix Warriors of Tyr's Own.

Aurorafaith currently owns no stalls/shoppes with no hopes to at this time.