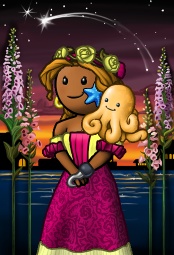 Atlantisblue is captain, and muse of the crew The Insanity Of Atlantis.

Atlantis or by the name many people call her either Blue or Bluey started on Wednesday October 17,2007 and lived first in Tigerleaf Mountain Island. Later moving to Fintan Island, where she currently still lives. For a while she wasn't in a crew. Later on she joined two crews but left. They didn't have what she was looking for. Two weeks later of crew jumping she settled down with the crew The Grand Laws Of Zenki, where she was made senior officer and met her best friends who are now in Lupercal.

On April 15, 2008, she and her friends decided to leave The Grand Laws Of Zenki. After some talking and deciding to leave their old crew, Atlantis and her friends decided to make their own crew what is now Lupercal. After being in Lupercal for a year, Atlantis decided to make her own crew after having an incident happen in crew One Blood with her friends Bflakes and Jaredpig. With Clawdia, Jaredpig, and Bflakes they started the crew My Blue Heaven. Clawdia came up with the name and everyone loved it. So on Dec 14, 2009 crew My Blue Heaven was born.

What pirates say about her

Vulcanic says that should pirates ever meet this pirate, they would not forget it because she is one of the nicest pirates in the whole ocean.