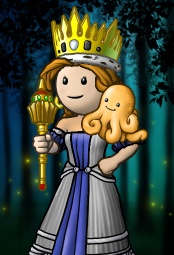 Aralynn, formerly known as just Aralyn is a pirate on the Meridian ocean. She is a senior officer and flirt in the crew Angels of Misery, and monarch of the flag Celestial Temptation. She has been playing on this pirate since August 2009, she played for two years earlier on the pirate Butterfly.

Known as the coolest pirate ever, Aralynn is often found pillaging or lazing about with best pirate mates Hoax, Miisery, Dalphin and Vodkasheep, or running her nightly pillage with her boyfriend Nodum.