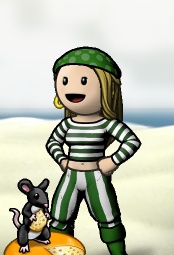 Animefreak is the captain and tactician of the crew Zodiac knights, and queen of the flag Knight's Order on the Hunter Ocean. This pirate has been deleted

Animefreak is the youngest in this family, with Weelassie is her older sister. Buxomwench is her mother - and a very nice pirate should you ever meet her. Arrghsplat is Animefreak's dad - a bit weird sometimes, but nice never the less. Believe it or not, these strange and unique people are actually related in real life!

Animefreak first joined Zodiac knights as a Cabin Person - her sister who had been in the crew for a while didn't see fit to promote her to anything higher. She worked up her ranks for a while. The crew's captain changed a while until the latest captain was banned and went dormant. She asked to be captain as the crew had only around five people left in it. The senior officer agreed and promoted her to captain.

Since then she has been working to get the crew back to its former glory.

A while after Animefreak became captain of Zodiac knights, she thought it was about time to get herself a flag. So she made one - Knight's Order. Within the first week, the flag was in Hunter's fame list - it hovered there around 12-15 for a while. Sadly, since about a month into the flag's creation, the member levels started to drop - the fame with them. But she is currently giving it her all to make it rise once again.