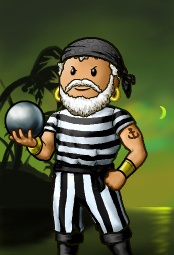 Aadam is an officer of the crew 'Impending Insanity' on the Ice Ocean, which sails under the flag 'Ice Cream'.

Aadam is a pirate on the Ice Ocean. Little is known about his history, or of how he came to be ranked as an officer in the crew 'Impending Insanity', and a member of the flag 'Ice Cream'. Aadam is a talented puzzler on the Ice Ocean. His achievements include attaining the top treasure drop, and blacksmithing positions on the whole Ice Ocean. He has also achieved ultimate puzzle standing in blacksmithing, hearts, and treasure drop.

Aadam has a collection of cute pets. These include a pig named Sexy, a sheep named Flexy, a cat named Squishy, and a dog named Kinky.