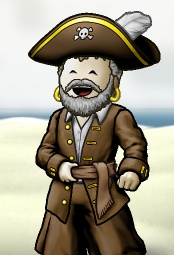 Silveransom is an senior officer of the crew Yohoaholics and a commander in the Wensleydale navy in the Gull Archipelago.

"Silveransom" is a play on a few different words. Silver is obvious enough, but Ransom may be a bit obscure. Then again, pirates would have been familiar with ransoms. The letters "ansom" here are also a homonym for Ansem, a key character in the (most excellent) Kingdom Hearts series.

Silver, as he's known to his mates, is a casual player with well above-average skills in puzzling, leadership and teaching. He may spend as much time writing tutorials as actually playing the game. He's also a professional artist, so he'll wind up in the occasional contest on the forums. He designed the rare Croatian black/gold/maroon egg in the Easter 2007 contest, and spent a bunch of very satisfying time helping others design and test their eggs, and did so again in 2008. He has two egg tutorials at present, found here for 3DS Max users and here for Blender users.

Rumor has it that he's silly, and occasionally funny, but it's probably just an accidental by-product of his somewhat expansive vocabulary. Silver does not speak Leetish, so his English can be confusing sometimes. He's also been accused of arrogance, which can often be confused with blunt honesty.

Silver also refuses to play political games, and oft times loves simply sailing solo on the seas of Sage in his shiny silver plated sloop, the Skeletal Silverside. He will also wander about Midnight if he's feeling confident or masochistic. He is the Captain of the small crews "Ride of the Valkyries" on Cobalt, "Silver Ice" on Ice, and "Silver Dragons" on Malachite. He aims to own a Silverside sloop on every ocean.

Silver's dear wife Lille joined him in piracy in late 2006, and the two of them are raising two little pirates-in-training, Briny and Rex.

Silver is also bemused that this page was made without his knowledge. He wishes to thank Merethif (a fellow artist) for that, and to thank Sweetiepiepi for her edit to correct his position in her Midnight crew. Silver just hasn't been motivated enough to do this prior to October 2007, despite having played since April 2006. He also has a mildly difficult time correcting his writing to reflect a third-person view.