Commodities spawn on colonized islands in accordance with demand. Players can "bid" for these commodities through the market bidding interface. 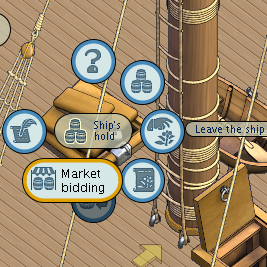 From the hold on a ship, the "View marketplace" menu in a market, or the Manage the Shoppe radial menu in a stall or shoppe, selecting "Market Bidding" brings the market bidding interface.

The market bidding interface can be confusing at first glance, but it is fairly straightforward. In the upper-left-hand area, a pirate may view all the commodities that spawn on the current island, as well as the current high bid and volume on each. In the center-right, pirates may place bids. In the upper right, pirates can view the coffers and deposit or withdraw from them. In the lower right, bid tickets currently held on the ship or in the stall/shoppe are displayed. The lower left displays the status of the pirate's current bids and the bids held on the ship or stall/shoppe.

Spawn rates for a commodity are driven by the price people pay for the commodity. As commodities spawn, they are divided amongst the highest bidders' bid tickets until all tickets at the highest price are filled, then the next price level down will start to fill. Note that it is not necessary to bid higher than the current price; matching the current high price will cause new bids to start filling at the same rate as existing bids.

The higher the bid volume or the lower the price, the longer it will take for that bid to fill. If there is a need for this process to go faster, then multiple smaller bids or a higher price may be necessary.

Bidding takes place via the form boxes on the right side of the screen. "Bid" corresponds to "High bid" in the left-side table. The quantity entered into the "Bid" form box is what a pirate is willing to pay per unit of the selected commodity. "Units" corresponds to "Volume"; whatever is placed in the "Units" form box is how many units a pirate wishes to purchase.

As numbers are entered, the "Cost" and "Fee" areas are automatically adjusted. The "Cost" is the "Bid" value multiplied by the "Units" value.

The "Fee" is composed as the sum of two components: a fixed 5% of the "Cost" and a variable component that depends on the "Bid" - which is the price paid per individual commodity unit. This variable component is either 5% of the "Bid" or 10 PoE, whichever is higher. Any decimal numbers in the final total fee are rounded off to the next highest digit.

This formula is important to keep in mind because it can help the planning of bids to obtain maximum value. Any bid prices greater than 200 PoE per commodity unit will see increasing savings by ordering larger quantities.

Bid tickets can be either filled or unfilled.

Once a bid is placed, a bid ticket is placed in in a pirate's inventory (if done from a market) or inside a stall, shoppe, or ship. These can be found under the collapsible section "Bid Tickets" in a player's inventory and under the Market Bidding screen in a stall, shoppe, or ship. The bid ticket is a handy reference to see if a bid is filled yet and a way to transfer and sell commodities if not officer or above.

In order to deliver a filled bid ticket, a pirate must be at the original island and at a receiving location with a hold. This could be: a stall or shoppe that pirate owns or manages; an unlocked ship in that pirate's crew (assuming they have the correct hold access rights); or a ship owned by that pirate. To deliver a bid, call up the market bidding interface. Select the ticket to be delivered from the ones listed there, and click on the "Deliver" button. Clicking "Deliver" will deliver as much of the bid as can fit; if not all the commodities fit, the bid ticket is amended and can be delivered in entirety at another time.

Note that in order to cancel a bid, a pirate must be in a location where they are able to receive the bid (see above).