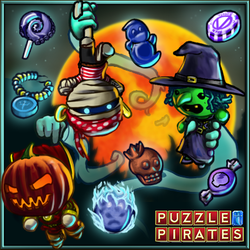 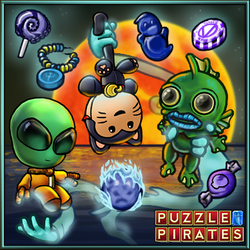 In 2014, the Trick ARRR Trinket event was run again, but using a new set of "Ghastly" candy trinkets. During the event, the candy trinkets could be won from Brigand Kings and Sea Monster Hunt locations. Additionally, a Red LicoARRRice trinket was available from Punkin' pails. As in previous years, all of the candy trinkets were found to also be winnable from unannounced puzzling competitions.

These trinkets could subsequently be exchanged at a trading post for monster doll trinkets, which could also be held in portraits.

In 2015, Ghastly candy was again available, along with three new dolls for which the candy could be traded.

The dolls added in 2014 were the lantern king, mummy, and witch dolls. In 2015, the cat lass, sea creature, and space oddity dolls were added.