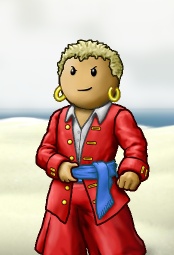 Zmurfy is a pirate on the Cobalt Ocean and is also known as Sgtsmith on the Midnight Ocean. He created this pirate on New Year's Day 2007 and it is now his main pirate.

Then on February the 20th 2007, he won a rose in a Treasure Drop tournament. Zmurfy went on to win the same tournament again on the 23rd of February, 2007, gaining his second rose. He did this again on the 25th Of February, and won yet another rose.

On 5th April, 2007, Zmurfy entered the Treasure Drop tournement 'Sunken Treasures'. It was tough battling through the rounds, But he eventually made it to the final against Charm, It was a very close game with holes spreading the coins out all over the board. Zmurfy took a lead at the end of the game and won the match, winning a Sand dollar and a Red Starfish. He entered the same tournement on the 6th of April, 2007 and fought against Assassin in the final, Taking another win to earn another Starfish and anotheer Sand Dollar.

With Zmurfy's growing interest in Treasure Drop, he entered the tournament Pachinko! He met some cool friends through the tournament and he still talks to them today. He reached the final and was proud to be there. Unfortunately for Blits, Zmurfy took the game and won the Hypnos Doll.

These are the most important trinkets he has/had. He won them all in tournaments.

These are his two pets. He received his pet rat Tilly when he first started on Cobalt on New Years Day 2007. He named his dog Horus after seeing an article on the internet with the name Horus in it. He knew he was to buy a dog on Puzzle Pirates that day and decided Horus would be the ideal name for this type of dog.