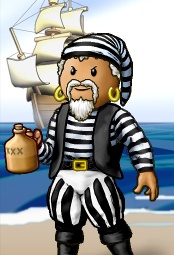 Woody is a Shanty Jockey for Shanty Raid-io on the Midnight Ocean.

His show Everybody Likes a "Woody" in the Morning is currently on hiatus, although he plans to return when possible.

Woody is an Azure-era persona, ex-monarch of the Hell's Outcasts and captain of Half Circle From Hell. As monarch, he initiated the first blockade of a colonized island in the history of the game, Guava I, which was decided 6-2 in favor of the defenders. As a royal in the merger-flags of Rudder Hell and later Equinox, he was integral in some of the more contentious early battles of Midnight, including Papaya I, Papaya II, and later Equinox's seisure of Guava.