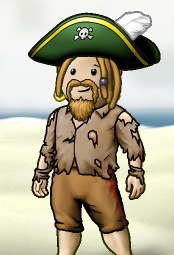 Tuvieja is currently a senior officer of the crew Viejas Locas and member of the flag Posthumous Reign. He sails proudly on the Hunter Ocean.

The start of the voyage

TuVieja started his piratey days on the wonderful ocean of Hunter. He joined an exciting crew called Alma Pirata and stayed there climbing up the ranks and eventually becoming captain.

As he sailed, TuVieja met new friends: Deformosa, Parlantito and Anonimo. They together gave Alma Pirata a greater reputation, making it into one of the most important crews on the Ocean.

As the months happened

TuVieja stopped playing the game because his father die in a horrible accident. When he left the game the flag started to crumble. They needed a new king. Deformosa took the throne but he couldn´t do too much. Pirates started to leave the flag - they wanted TuVieja again.

The Return of the King

One day TuVieja logged in and became King again. The flag started to recover but not to the heights as before he left. He did a tremendous effort and it started to grew up again.

On the 14th of December of this very piratey year, TuVieja celebrated his birthday in the company of his closest friends. Held in the spectacular grounds of Anonimo´s villa, there was drinking and laughter and plenty of games and prizes to keep the guests entertained. Followed by a little stressful war frigate pillage with Parlantito at the helm.

He received many beautiful cards and presents from his hearties, for which he would like to give thanks.