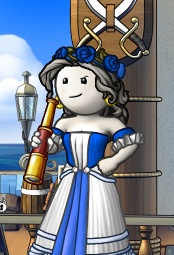 Sweetiepiepi is captain of The Phoenix Warriors and a queen of the flag Tyr's Own on the Midnight Ocean. In addition, she also holds active characters on all five of the English speaking oceans. Considered by many to be one of the most accomplished battle navigators in the game, Sweetiepiepi has been known to lead high end, profitable pillages often and her forum commentaries on pillaging and the state of navigation are usually highly regarded. Sweetiepiepi is also an accomplished blockade admiral having led the flag Tyr's Own in numerous assaults and defenses, most notably at the blockades of Byrne Island and Jorvik Island.