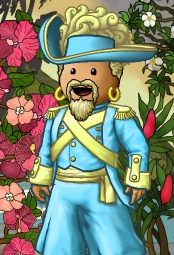 Simonjr's is a captain in the crew The Ice Apocalypse on the ocean of Cerulean. Simonjr is also a prince of the flag The Midnight Mist which he founded on 6th Feb 2009.

Simonjr started to play Y!PP in the early days when he remembers that anyone could navigate as long as they were order to do so although this was under a different nickname, which to this day is unknown to him. But in the summer of 2005, He stumbled back upon Y!PP and created a new account and thus Simonjr was born.

Simonjr was most probably the worst greenie around only wanting to bilge as he found the other puzzles either too hard or really boring and would loose attention to it rather quick and just laze. One day in October he jobbed for the crew The Jolly Otters and rather liked the captain and the crew and asked to become a full member. There in that crew he learned valuable lessons and much enjoyed talking to the rest of the crew where he met many friends that he still talks too. Although at the end of November Simonjr became dormant and disappeared into the night not to return later at the beginning of the summer. The reason he said was "Argh stupid school".

Dispite this the crew welcomed him back with open arms and crew memebers shouting "SIMONNNN!!!!" and getting slobbered over by the senior officer Rosies, who still slobbers over him and still get the same reponse of "ewwwwwwww". It was in this year that he acquired a subscription, but only for one month. But during this month he bought 2 sloops, the Small Mummichog and the Elegant Chub. He also got trained by the captain at the time, Merlin, and increased in rank to become a fleet officer of the Jolly Otters.

When Simonjr's Sub came to a close, he kindly asked Rosies to look after his ships and transfered the deeds to her. Unbeknown to him at the time that she would paint them. And again Simonjr went dormant.

This time he was only dormant for a month and left The Jolly Otters to join Beyond the Sea, With Kiok as captain. He was promoted to fleet officer. Still to this day Simonjr is a memeber of The Jolly Otters under his alt, Simonarrow.

Simonjr and Kiok often have talks and compete with each other, If you catch them together, they are probaly chatting away on Flag Officer chat, with Simonjr saying how he is better that Kiok in Rumble and this has been proven many times. On the 12th June 2008 they had a competition to see who was the best out of the parlor games. Kiok won at Swordfighting and Treasure Drop, where as Simonjr won at Drinking and Rumble, Simonjr then closed out by saying, "Well its a draw, we both suck at two puzzles" Kiok replyed "way to think positive simon".

Simonjr slipped into dormancy again in the spring of 2007 and returned at the end acquiring another subscription, again for only a month. For the next half a year he would appear and job for a crew to earn PoE then stash it away in his house, saving for a rainy day. His subscription ran out and was reduced to rags and thus went dormant until the end of May 2008.

He was greeted, as before, by the rest of the crew who had missed him and still was wondering where he disappears too. He replied with a different reason this time... "Im in my last year of school so i have been busy with school and stuff. But i hadnt got the client on my new laptop so i couldnt be bothered to go through the website lol" everyone laughed and let it pass.

After this he had aquired a yearly sub, staying in the pirate world for a whole year and a half, coming on to play with new features and to maintain his stall on sake. Again after this long period, he sank into a dormantacy of a few weeks at a time, just hopping on to check his stall and say hi.

As of recent, he has been playing more that he did before. Maybe its due to boredum or just that he has time now, taking breaks from work and college. In novemeber of 2009 he became the only furni stall owner on sake, with competitive prices on most items.

In 2011, Simonjr closed his stall empire on Sakejima Island and left Puzzle Pirates, leaving all his built up comods on his Merchant Brig. Selling them occasionally when the prices rose.

In 2012 when the oceans merged, Simonjr resurfaced and has since been playing more. He has begun to re-open his stalls but this time on Tinga Island. He has already forged a business relationship with a Shoppe owner on another island.

In 2015, Simonjr moved over to the Emerald Ocean under the pirate name Deletedice