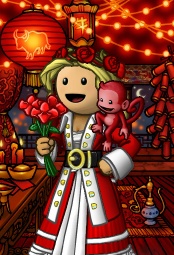 Sharuka is a pirate on the Midnight Ocean.

She became an active participant of the OM hosted races after dipping her feet in the water with the Summer Runnin' Ship Races in June and has many pirates such as Abyzaran, Hatchetback, Kangturow, and Donsmythe to thank for her success.

Currently, she calls the crew Made of Fail under the flag Fallen her home.