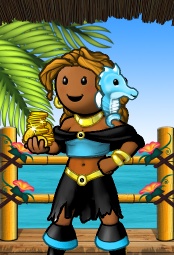 Sassythang is presently captain in the crew Serial Pillagers and princess of the flag The Art of War on the Cobalt Ocean.

Sassythang started her Cobalt life in Febuary, 2008. She woke up with a smile on her face and a sword in her hand. She joined the Serial Pillagers where she quickly worked her way up to Fleet Officer. After a little longer she earned herself the title of Lady with her flag The Art of War. She then became Senior Officer and then began working towards the role of Captain. She governed Tigerleaf Mountain for a while and now governs Raven's Roost both in the Onyx Arch. Sassythang owns 4 familiars on the Cobalt Ocean which she loves almost as much as her crew. Sassythang has earned herself some decent stats, a few nice homes, and a Grandoise Hall for her awesome crew!