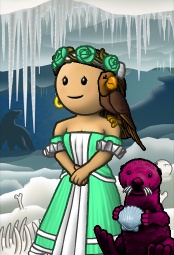 Rubes is a senior officer of Iron Warriors. She is also a princess of Moonlight Raiders.

Starting as a mere officer under the old captain Frenzy, she rose in rank to senior officer where she made the crew a community where pirates from all places were welcomed and granted a home. One day, a dispute among the crew's highest members showed that only Rubes had the power to keep the crew together, at which Frenzy stepped down as captain and let Rubes rise to the leadership seat.