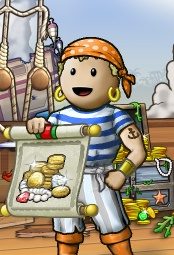 Richarrdie is a pirate of the Midnight, Cobalt, Sage, and Crimson oceans.

He started out on Midnight, then moved to Cobalt, but as soon as he learned about doubloon oceans, he moved to Sage. He explored Crimson as soon as soon as he knew it had been released, but prefers to be on Sage fighting the sea monsters. He wants to go to the Cursed Isles although he does not have very good stats.