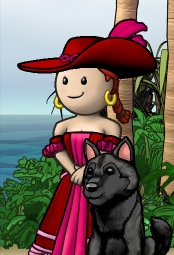 Redjenny washed ashore on the beaches of Tigerleaf Mountain in February of 2006. After a month or so of playing she jobbed aboard a pillage run by Sweeswabby, then senior officer of the crew Gnus of Great Justice, which became her crew for 3 years. In 2008 she became the third Monarch of the flag Raiders of the Lost Arch. In 2011, Redjenny merged her crew into Health Nutz of the flag Static before the Storm.

Redjenny enjoys bilging, poker, and writing contests. She holds the name "Redjenny" on all oceans, but prefers to play other oceans anonymously.