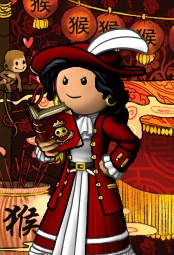 Purpure is a Rumble champion but a Swordfighting chump. She is an all rounder but isn't much of a drunkard or carouser.

She is better known for being a skilled sailor, somehow.

She has currently returned to Puzzle Pirates after a long hiatus, in which the oceans merged.

Being a bastard child in Victorian England is no walk in the park, even if your step-uncle has decided to flout convention and raise you as one of his own. That's what happened to Purpure in her childhood, as her father was a neglectful man-about-town and her mother one of his housemaids.

Gules felt that the responsibility of making Purpure a respectable lady along with his own daughters fell onto him. By 1839, he had planned for his step-niece to spend a few years in an American boarding school to complete her education. However, that plan was never carried out, as the passenger ship Carnation sank halfway through its voyage in January 1840. It was widely believed for years after the sinking that there were no survivors.

Guilt lay heavy on Gules' heart. He wished he had never accepted Miss Tracy's offer to school Purpure. In the meantime, the bastard niece was building her own reputation as an impolite but hardworking pirate out in the remote pirate colonies.

Purpure returned to England in late 1842, after pressuring a member of the British navy to allow her to return. As she had not actually committed acts of treason, she couldn't be sent to the gallows. Her return was a shock and a relief to Gules, and a fresh scandal in the Lion family. She was also mobbed to give interviews about surviving the Carnation's sinking, but she fended them off by saying she didn't want to relive the tragedy just yet.

Some people already knew what her name meant without her telling them. They include French pirates and those who are learned in heraldry.

Other things to note: