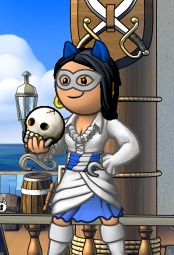 Ofthecross's first crew was Divine Right, she joined as a greenie and pirate and left as a senior officer. Divine Right merged and she moved on. She joined another crew, and it soon merged as well. She left them and moved on to Kiss for luck. Soon after she joined, the captain decided to expel most of the members. However, she was one of the few that were kept. She remains there as senior officer to this day.

When zombies and skellies started to overrun the ocean, she eagerly joined the masses rushing to kill them and get bloody flesh and bone parts. She did tolerably well and got quite a few body parts. She made good friends with the ghosts and learned all their haunts. While whisking from abandoned island to abandoned island, she found a black dog. She also got a black cat, and quite enjoyed the bad luck it gave to everyone else.

Foolish foolish Ofthecross decided to take an undermanned sloop into the dangerous seas of Atlantis. Her boat can now be found underwater. She jumped into the water looking for gold that might be at the bottom of the sea. To her dismay there was none, and when she got back up for breath she realised that her boat had sunk and saw two Atlantean ships coming her way. On her way back she realised she was having a hard time swimming. She wondered why, so she looked around for any clue, and when she tried to pick up something it slid out of some large metal thing on her hand, which she noticed was shaped like a hook!! She quickly tried to pull it off, but it was futile and afforded her great pain, so she stopped trying.

Unfortunately for her crews and jobbers (not that there were that many, since they quickly learned to leave), she pillaged. Any ship she led eventually got high water levels, many holes, and broken sails. She noticed this and decided to start memming instead. Last anyone heard from Ofthecross, she had memmed around 70 percent of the ocean.

Her character has now gone dormant and has been deleted.