As ye sail about, the booty pillaged from the other vessels is accumulated on yer own vessel. Ye can inspect the Booty at any time by clicking on the treasure chest and selecting the appropriate menu item. After winning a battle, 50% of the Pieces of Eight won are immediately divided among the pirates aboard. The crew's restock cut of that 50% will be automatically placed in the ship's hold, or into an officer's pocket if no Fleet Officers or above are aboard. The rest of the booty is placed into the Booty chest to be divided when the vessel returns to port. 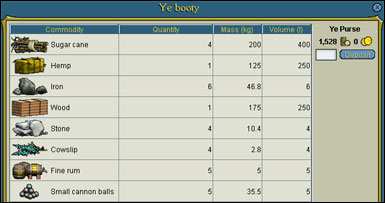 As a crew sails around collecting gold and commodities, they may occasionally wish to put into port and sell the pillaged commodities, the proceeds from which will be placed into the booty. A crew will be well suited to know the ports that pay dearly for certain commodities and those that have hardly a fair price. Beware! A vessel left abandoned at sea too long will have its Booty thrown overboard to lighten the load in order to return to port.

When the crew has had their fill o' pillagin' and wishes to divide up the spoils, they may put into port at which point any officer aboard the vessel may propose a division of the booty. They do this by clicking on the treasure chest and selecting the appropriate menu item. Beware that if yer not an officer, you won't be seein' any such menu item. 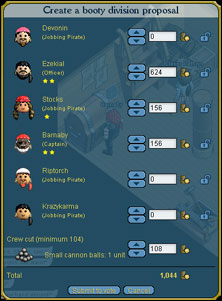 The booty division interface will come up with a default division according to the articles of the crew and how many battles each Pirate participated in. By default the Booty is divided equally according to the number of battles, which are represented by stars beside the Pirates' names. The officer may then make adjustments to that division, rewarding pirates more or less if they came through in times of need or spent most of the voyage lazin' about.

When the officer is satisfied with their division, they propose it to the crew, who are notified that a proposal is on the table. They then inspect the proposal by clicking on the "Vote on booty" button in the Vessel tab which will be made visible when the proposal is delivered. They then vote yea or nay on the division and a majority vote is needed to effect the division.