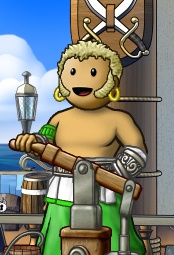 Currently, Mye is an independant pirate of the viridian ocean.

Mye began his start on the viridian ocean, joining the crew reality in january 2007. After passing brutally tough officer tests, he thought it wasn't worth his while to stay, and found himself joining the crew "metamorphosis". In that crew, he found many hearties, and much wealth, buying his first cat "Mr.Bigglesworth", and his first sloop "rude tench". He had only been with the crew for about 3 weeks, when he/some of his fellow crew members wanted to declare mutiny. So after much thought, he made his first crew "trilogy", under the flag "trilo-dragon hq". He had much success with the crew, earning multiple bilging trophies as well as enough poe to buy the best of ships. But after verbal disagreements between his senior officers/fleet officers, the crew disbanded, making mye choose to leave puzzle pirates for a couple months. When he got back, most of his former hearties had decided to quit the ocean, forcing mye to start "fresh". After crew hopping by about 12 different crews, he made his own, calling it "sea memories", in "memory" of his former allies. He hired his new hearties from all the crew hopping, and the legend continues... After renaming his sloops to "flaming tench" and "frozen tench", painting the frozen tench all blue, flaming tench all maroon, he continued his "rebuild", and tried to get what he used to have.

After a month of trying to rebuild his empire, Mye decided to focus instead on building his widely known knowledge of the ocean's politics. He started focusing on learning about the politics in the ring he was in (RMP4P), and quickly learned the horrid truth of their scared lore they call "political equality". Mye's seeking of knowledge had quickly added a hatred to his former allies of the RMP4P ring, so instead of adding more damage to an already broken wall, he left for a place where his political knowledge could quickly be increased, the ring of SWRI. His knowledge has grown, and is getting better, yet he still lacks the power to use his lore to his advantage.....

Though people think Mye has ended his pirate career..in fact he has not. He has simply moved over to the Hunter Ocean. Be on the look out for his Hunter Main account "myewithanm", the name being a tribute to his long time hearty "kriswithak".