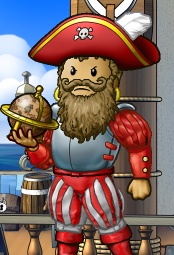 Mouselion first started on the path of piracy when he joined Balls of Fire under the leadership of Cannonball. After some time in that crew he left with Cannonball and moved between several crews following in his captain's footsteps. Whilst moving between crews he learned a lot.

After Cannonball disbanded the crew while Mouselion was at sea, Mouselion decided to form his own crew to get his ship back to port. This short-lived crew was named Abandoned Me at Sea. After several crew mergers he eventually found himself in the crew Bloodscale Dragonauts. He is currently content to pillage the sea with this fine crew.