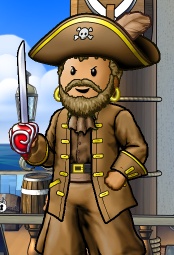 Martynus,the nickname of Martyn, of the Sage Ocean started on july 1st 2007 after visiting a game website containing puzzle pirates. He soon loved the puzzles,and he started his career as a greenie. He first joined the flag The monsters. He mades some friends like Jainamarie or Dyold. It was his golden age. Then, after a small time without connecting, he came back but his crew was deleted. He joined a crew,with the captain Kasy counting with them Mrbritain wich is now Mrbrit. They became good friends,and sailed together since. After a long time,he saved his poes to do his own crew. For a small period, he joined Mrbritain's crew. Then he created Blood Thirst.

He soon knew he would need a ship to become someone in the game. For a month he kept his money to buy a sloop. After this he started his crew. He also created Domovoy for his best friend.

Martynus is actually pillaging for poes, for the fame and the crew. After buying a dog, all the badges and the captain clothes, he turns up to furnitures and helping greenies, as he joined the greeters on the 24th of December 2007.

He still needs to train on puzzles, part from Blacksmithing, his mastership.