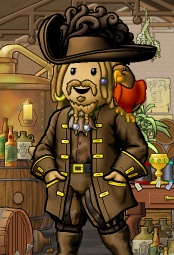 Luck is captain of Luck and the king of the flag One in a Million on the Ice Ocean. He is often remembered as his old pirates, Fortunado and Kingyellow. He began playing Ice in 2007, after his poker addiction continued to rob him of his hard earned money. Coming to Ice made it so he could only play when other people wanted to, which was 10% of the time. Now Luck is a politically neutral soul, who just wants to be mates with everyone. He runs pillages constantly, and purposely sinks sloops on occasion in hopes of acquiring an injury. Since the beginning of time on PP, he has yet to get even one injury. So Luck sits on Ice, looking to make a purchase from an old Ice soul, or gamble whenever possible.