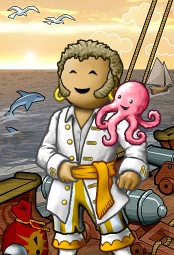 Lucen sails with Pirates Internationale, flying the Caper's Capers on the Midnight Ocean.

Lucen first washed up upon the shores of Jorvik Island in Fall 2004 and soon became a member of the crew Moonlit Madness captained by Sexysarla. He served a short stint, becoming quite mad during the moonlit hours - of course - and rose dubiously to the rank of officer before quitting for a span of months.

He returned in April 2005 and shortly thereafter along with his real-life girlfriend Kalaena formed the crew Ninjas in the Night. The crew grew swiftly - as far as a new crew goes - and Lucen and Kalaena made many friends.

It was during this time he discovered his penchant for the drinking game. It could have been luck or skill: all Lucen knew was that he enjoyed it, and won more often than he lost. He made friends with many top-ranked drinkers during that time, and come January 27th, 2006, he won a pink octopus familiar which he named Pinky.

The crew joined the flag Floating Circus, which did not do altogether that much and when Lucen was given an invitation to join Caper's Capers, he accepted at once. He was promoted to flag royalty somewhere around May 2006.

Alas, nothing lasts forever. Real-life commitments began to get in the way of his captaincy of the Ninjas in the Night and he handed the crew over to Kalaena, who eventually would merge it with Pirates Internationale.

He returned for a while to pillage, poker and drink during Fall 2006, but by-and-far did absolutely nothing productive and wasted his money on frivolous items, if there could be such a thing. He is currently on hiatus - again (happily ever after, too).