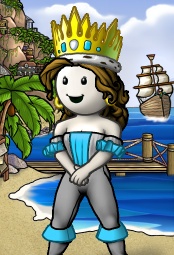 Lizzielou is a senior officer annd first mate of the crew Dragon's Blood on the Cerulean Ocean and a princess of the flag Dragon's Fury.

The following July Descendents of Annwn merged with Dragon's Blood.