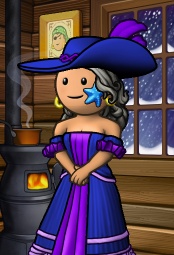 Krynda first arrived on the Sage ocean in July 2007. After serving under the crews, The Editors and Whatever Floats Ya Boat, and captaining her own, Whisked, Krynda is currently Senior Officer of Crimson Assurance and Princess of Spontaneous Combustion.

Krynda arrived upon the Sage Ocean in the early summer of 2007. While working to earn pieces of eight, Krynda stumbled upon a crew named, The Editors, after experiencing an enjoyable and friendly pillage, Krynda happily accepted joining the crew full time. Over the course of the following months, Krynda progressed the ranks in the crew, eventually becoming senior officer in September 07, and making many new friends along the way, including Anamii, Cruarch, Dettol, and many other members of her crew. In November, 2007, “The Editors” merged with the crew, “Whatever Floats Ya Boat”.

Following the merger, Krynda left to form her own crew, “Whisked” on December 14 and joined the flag, Spontaneous Combustion. In early January 2008, several former members of “The Editors” joined Whisked and crew prospered over the coming months, Krynda was made Princess of Spontaneous Combustion in March 08.

In late 2008, Whisked had become mostly dormant; leading to Krynda joining the crew Crimson Assurance, with her crew’s remaining members, leaving Whisked as an alt crew.

Today, Krynda is senior officer of Crimson Assurance and Princess of Spontaneous Combustion.