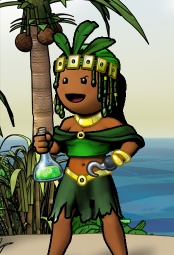 Javoch first arrived on the Midnight Ocean back in August of 2004. She was one of the three founders of the Corsairs of Umbar, led by Foilistc. After leaving the Corsairs, Javoch spent some time traveling through the ocean via various crews she had come into contact with throughout her tenure on Midnight before finally settling with The Phoenix Warriors, at that time led by Juanita.

While never becoming a household name throughout Midnight, Javoch has earned respect from some due to her Gunning Guideand then the Sailing Guide that followed shortly after. Rumor has it that she has more plans for future tutorials, but so far none have come to light.

Javoch can be found these days spending her time pillaging a sea, trying in vain to learn to rumble, or drinking in the inn spinning a yarn for some gullible greenie. If pirates chance to meet her, they should try not to believe anything she tells them. They'll live longer that way.