A screenshot is an image taken by the computer to record the visible items on the monitor, and is commonly used to capture in-game images.

You can use the inbuilt /print command that will take a copy of your current client window and saves it as a .png file named "Puzzle Pirates <piratename>", to a location as specified in the client options. Ctrl-P will perform the same function. If you need to capture the entire desktop you still have to use the manual methods below.

For Windows users, (1) make sure you have the desired scene loaded in-game; (2) press the Alt and Print Screen keys on your keyboard; (3) Open an image editing program, such as Microsoft Paint, and paste the image; (4)-(5) save your image under the desired file name. (Click on the image to view full-sized version.)

Taking screenshots with a Mac 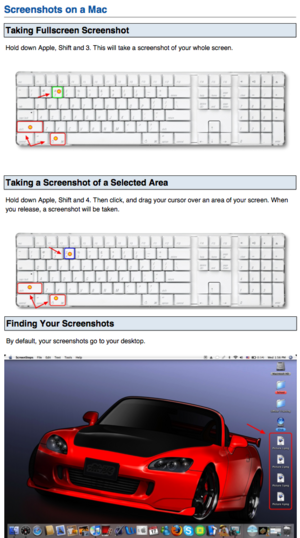 For Macintosh users, (1) Make sure you have the desired scene loaded in-game; (2) Press Command-Shift-3 or 4. Pressing 3 will capture the entire screen, while 4 will allow you to select a certain area of the screen to capture; (3) The image files save to your desktop. (Click on the image to view full-sized version.)

Image editors can be used to alter screenshots for various purposes.