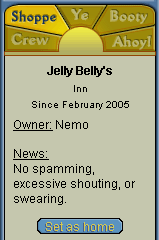 A pirate's home is the location that he or she whisks to when he or she clicks the "Go home" button on the Ye panel. If the pirate is currently on their home island, the minimap indicates their home with a green marker.

When a pirate uses a whisking potion to get to their home island, they will receive a message afterwards stating that they can whisk to that island at no cost by clicking "Go home".

Setting a location as home